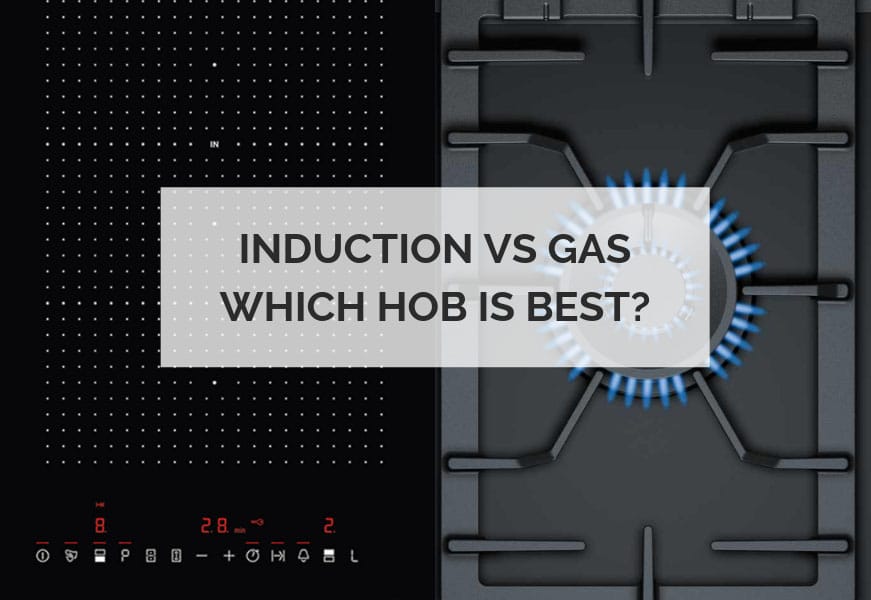 Induction vs Gas – Which Hob Is Best?

The question which is best, an induction or gas hob? is one I get asked almost daily. It’s a seemingly simple question, but one that can completely divide people. It can even cause arguments in some households!

Ultimately, the decision between induction and gas is down to personal preference. It’s usually a matter of the user’s cooking style and the look they want to achieve for their kitchen.

This post will explore and weigh up the pros and cons of both induction and gas hobs. So, by the end of reading this, you should be able to make the right choice for your kitchen and cooking needs.

What Is An Induction Hob?

An induction hob is a type of cooktop that uses electromagnetism to heat up and cook food.

Induction hobs are smooth and flat and can come in a variety of shapes and sizes. The shape, size and variety of cooking features available will depend on the make and model of the induction hob.

But how does it work?

Underneath each zone of the induction hob is a tightly wound copper coil. When the hob is switched on, the electricity will flow through this coil, creating a high frequency alternating magnetic field.

This electromagnetic field will create a reaction between the induction zone on the hob and the bottom of the pan. For this reaction to occur, induction hobs require special pans that have a magnetic metal base.

For more information on induction hobs, check out my post
Pros and Cons of Induction Hobs.

What Is A Gas Hob?

Cooking on gas is probably what most people are used to. These hobs have been around for a long time and are often quoted as being the chef’s choice, as you get instant heat and flame cooking ability.

Explaining how gas hobs work is much simpler than induction. Gas comes up through the burner rings, which is then ignited by a lighter spark operated through the knob. This spark is that familiar clicking noise you hear when turning on a gas hob.

Cooking with gas hobs is quick, controllable and you don’t need to worry about having any particular pots and pans for it to work. It’s also easy to change temperatures for adjustments while cooking.

Here are five key considerations for choosing a hob/cooktop, as well as pros and cons for each of these key points.

Generally speaking, induction hobs will cost more than gas hobs when purchasing the appliance itself.

However, you should also consider the fitting cost. If you don’t already have a gas supply, having one installed can be a costly endeavour (or may not even be possible), depending on your circumstances.

The same may be true for induction. Unless you opt for a lower-powered 13 amp plug-and-play hob, you will need to have a bigger dedicated cable to supply power to the hob. If you don’t already have the necessary cables in place, this could also be costly.

Another price consideration is whether you will need new pots and pans – a necessity if you decide to go with induction. As induction hobs work on electromagnetism, they require the bottoms of the pans to be magnetic. Otherwise, they simply won’t work on the hob.

A watched kettle never boils. Neither does a nonmagnetic one on induction.

So, if the price is a deciding factor, don’t forget to consider these other cost implications, and make sure you check if it’s even possible to install a certain hob in your home before finding your dream one.

Gas hobs are undoubtedly faster at heating up than induction hobs because they produce an instant flame. Conversely, induction hobs will build up the temperature as the electromagnetic current increases.

In a Which? Test  “The fastest induction hob took less than 3.5 minutes to heat a big saucepan of water from tap temperature to just short of boiling, whereas the quickest gas hob took 8.5 minutes to do the same thing.”

This is because induction hobs are more efficient at using and distributing the heat they produce than gas hobs. Think about if you’ve ever used a gas hob on full power; the flame can come up the sides and won’t be evenly distributed across the bottom of the pan.

Although it is instantly hot, there is much more wasted heat with gas hobs, with less going into the food you are preparing.

When I talk about control, I mean how easy it is to turn the hob on and change temperatures while cooking.

With gas hobs, your cooktop is instantly switched on when you twist the dial and ignite the flame. Changing temperature is also instant; simply use the knobs to let more or less gas flow through.

Gas hobs are quick to start and change temperature. However, they can be a little tricky to set to precise temperatures every time, and you’ll often find yourself bending over to look under the pan at how high the flames are to help judge what heat setting you are on.

Induction hobs usually have three steps in the process before they are ready to go. Firstly you have to turn the hob on, then select the zone you want to use, and finally dial in the temperature setting.

This does take a few seconds longer than gas, but once up and running changing it is simple to change the temperature with just the touch of a button.

Induction hobs are also far more accurate and controllable, as each temperature setting is always the same every time you use it and you know exactly what setting you are on.

Induction hobs tend to be associated with modern, sleek looking kitchens. Their simple, minimalist design lends itself to a clean and contemporary look.

Conversely, gas hobs, having been around and used for much longer, tend to fit well in more traditional-style kitchens.

This is not to say that you can only have an induction hob in a modern kitchen or vice versa. It’s very much a personal choice.

When it comes to cleaning, it’s another win for the induction hob. As induction hobs are completely flat, cleaning them is as simple as a quick wipe after use. There are no knobs or supports to lift out the way or get food stuck to. It’s one smooth flat surface to easily wipe down, much like wiping down your worktop.

Gas hobs, on the other hand, can leave you jostling heavy, cast-iron pan supports and struggling to clean all the removable parts around the burners that always manage to get food stuck on them. It’s never a quick task when you have to clean a gas hob.

When it comes to safety, the induction hob is a hands-down winner (no pun intended).

That’s not to say that there are no safety features on gas hobs. Some gas hobs have a shut-off valve if gas is coming out but it is not igniting. This is a good safety feature to stop gas from filling the room, but it won’t automatically turn the hob off if you’ve left a flame burning.

Firstly, there is no open flame that can set things alight. We all know someone who’s accidentally left the gas hob on and then put a tea towel down near it, only for it to go up in flames.

With induction hobs, you can put a tea towel or paper towel right next to the hob and nothing will happen. It is only the magnetic surface that is in contact with the hob that will transfer heat; the rest of the hob – and everything around it – stays cool to the touch.

This means that even if you accidentally turn the hob on, nothing will happen unless you put a magnetic pan on the hob. Furthermore, if you remove a pan the hob will automatically switch off after a few seconds if no other pans are detected. This makes induction hobs the child-friendly option.

Most induction hubs even have an additional safety feature for children as they come with child lock features, so your little ones can’t switch the hob on.

Which Is More Environmentally Friendly, Induction Or Gas Hobs?

Induction hobs are often said to be more environmentally friendly than gas hobs.

As induction hobs run off of electricity, they can be powered by renewable energy sources. Gas hobs, on the other hand, rely on natural gas to power them, which is a fossil fuel.

The way induction hobs work also means that they are far more efficient at using as much of the heat generated as possible. This is achieved because only the surface in contact with the hob is heated and there is little heat escape around the outside of the pan.

Gas hobs, on the other hand, are often less efficient as more of the heat generated is lost because it can escape around the sides of the pan.

You May Also Like:
Can You Get A Wok Induction Hob?

Which Hob Is Faster At Boiling Water: Induction Or Gas?

Induction hobs are faster than gas hobs at boiling water. See for yourself in this video where they time how long it takes for each hob to boil the same amount of water.

Can You Get A Combined Induction And Gas Hob?

Yes, you can get hobs that combine both induction and gas into one appliance.

There are two options if you would like to have this in your kitchen.

The first is to buy a single hob that combines the two such as this Smeg PM6912WLDR Induction and Gas Mixed Hob.

You May Also Like:
The Best Mixed Fuel Hobs – Induction & Gas All In One.

The other option is to have domino hobs. These are smaller modular hobs that you can use to create different hob types together in one zone. This allows you to mix and match the types you would like in your kitchen.

Whatever your budget, aesthetic, or cooking style, there is a perfect hob out there for you.

If you are looking for a quick-heating, chef’s choice option that fits nicely into a traditional kitchen, then a gas hob may be perfect for you.

If you fancy a modern, sleek, easy-clean and child-friendly option that looks great next to your slick new appliances, then induction might be the way to go.

Either way, make sure to consider your budget and the feasibility of installing your dream hob before you go too far down the purchase process. Heartbreak has no place in your kitchen design! As always, check with your kitchen designer if you have any questions.

Want to learn more about the appliances for your new kitchen, then have a read through some of my posts in the Appliance Guides section. 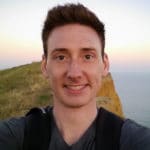